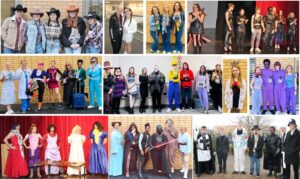 You’ll find more photographs from Smile Week in a special album on our Facebook page.

The week beginning Monday 28th November was Vandyke’s annual Smile Malawi week, in which the Sixth Form dress up, choreograph events and the teachers get pied! The dress up categories, chosen by the Sixth Form events committee, were; monochrome Monday, TV and film Tuesday, Wild West Wednesday, Childhood dreams Thursday and Pyjama Friday.  All days were a hit, with inventive costumes from all Sixth Form students and teachers.

After a conversation with the head of Sixth Form, Mrs Quinn, I discovered more about the background of Smile Malawi. The money raised in past years has gone towards the orphanage’s staff salaries, new buildings, such as a toilet block, and last year a heart operation for an aspiring young doctor. Mrs Quinn spoke about how Smile week helps students at Vandyke ‘Think of others who are less fortunate than themselves’ . Also, how ‘the week brings together the school as a community as it leads to students working together – especially the Sixth Form student team who learn how to manage events, which takes great commitment and responsibility. Vandyke will continue working with Smile Malawi and run smile week for as long as the charity needs our support’.

I learnt how this charity was founded by Elspeth Baecke after witnessing the help necessary for the children in Malawi, ‘she is a woman who juggles a lot and has helped many’. Elspeth will come to Vandyke to collect the cheque and thank students for their hard work in raising money, which every year is highly appreciated.

Just one of the many events organised by the Sixth Form team was Vandyke’s Got Talent, held on Wednesday 30th November. Open to all, with a strong turnout, the show raised plenty for Smile   Malawi and was a chance for Vandyke to show its wide array of musicians. Acts included solo artists and bands from all years who showed courage taking to the stage for the charity. The winner, voted by the crowd, was Miles Ellington-Reason – Year 11, who wowed with his guitar performance and singing, highlighting the talent at Vandyke school.

Smile Malawi week ended with congratulations from headteacher, Mr Carroll, towards the Sixth Form who stepped up and took every opportunity to raise money for this fantastic cause.