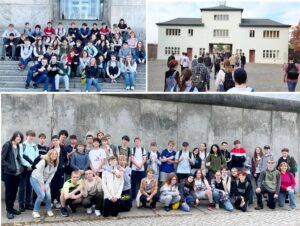 A calm and mild morning was what greeted students when first arriving at Vandyke at 3am on the day the trip left. After an unfortunate delay we got on the road and headed to Gatwick airport for an early flight. This all proceeded smoothly and we arrived to a fresh and bright day in Berlin. Our well located hotel was 15 minutes from the Reichstag and the Brandenburg gate and we began by walking through these sights to our first spot, the famous Checkpoint Charlie, the place that marked a standoff between US and Soviet forces when the Berlin Wall was first built. Students perused an excellent museum, as well as lots of group selfies at the actual checkpoint. It was then off for a nice dinner in the fading light, which also allowed us to take in the spectacular sights of Berlin during the Festival of Light.

The second day encompassed lots of coach journeys, with visits to surrounding places in Berlin. The first stop was Potsdam, built for Kaiser Willhelm II’s son in WW1 and home to the famous Potsdam Conference at the end of the Second World War. Students had a great visual guide around the stylish house and were able to immerse themselves in the setting of the conference. It was then onto Sachsenhausen via a short stop for lunch.  This was home to many of the horrors involved in the Nazi regime and students could see first hand, the effects of persecution of minorities and political opponents. Students as ever were extremely respectful and reflective when journeying around the site of the camp in small groups with their teachers. After the journey home and brief stop at the hotel, it was onto a dinner of local German cuisine, students had mixed reviews on the sauerkraut, but raved about the Frikadellen and Bratwurst! Our final stop was the famous TV tower where students could see spectacular night views of the city.

Day three began leisurely and involved a guided tour of the city by Mrs Quinn and Mr Bodo. Among the places we visited were the Berlin Wall museum, the site of the Nazi book burnings, the Holocaust memorial and the suspected site where Hitler’s body was burnt. The afternoon was  spent around Potsdammer Platz for lunch, before onto the outdoor Topography of Terror, a very visual museum dedicated to the terror system enacted by Hitler. Dinner at a lively ‘Pirates’ restaurant preceded an evening of ten pin bowling, where some unusual styles were shown and students struggled to match the teachers!

Our final day perhaps saw the best saved until last – the visit to the Reichstag dome. Here students were able to take in the breathtaking sights of the Reichstag, home to so much political change and turbulence in Germany over the last 150 years since its creation as a country. The students could also take in the magnificent daytime view of the surrounding beauty around the old magnificent building.  After some shopping it was time to head home.

As ever, Vandyke students were a credit to themselves and the school. Their behaviour and attitude was impeccable at all times, especially when navigating the very busy and vast city of Berlin. Thank you to all the staff and students who made the trip possible and so thoroughly enjoyable.  A short rest from trips for the History team now, but roll on trips in 2023!